Short for DZ by Abbreviationfinder, Algeria is a republic with relatively strong presidential power. According to the constitution, the country is a democracy with multi-party systems and with Islam as a state religion. In fact, FLN, the party that sprang from the liberation struggle against France a little over half a century ago, has continued to dominate even since the one-party state was abolished in 1989. The military is a strong force of power.

The Constitution stipulates that discrimination is prohibited and that freedom of opinion, association and opinion should prevail, but in reality authorities persecute those who criticize the government and prevent demonstrations and meetings. All elections are usually surrounded by accusations of electoral fraud.

The president, who is head of state and commander-in-chief, is elected in general elections every five years. Candidates must be approved by the Constitutional Council, which has the highest legal power to monitor, among other things, electoral processes and referendums.

A restriction on two terms of office for the presidential post was removed by a constitutional amendment in 2008 which allowed Abdelaziz Bouteflika to be re-elected both a third and a fourth time. A new constitutional amendment that reintroduced the restriction was adopted in 2016. During Bouteflika’s presidency, constitutional changes were also implemented that strengthened the presidential power in relation to the prime minister and the security service (see Current policy).

The President appoints the Prime Minister and must, since 2016, elect someone from the largest party in Parliament.

Parliament has two chambers, both of which are legislative. The lower house (National People’s Assembly) has 462 members since the elections in 2012. The elections are proportional and are held every five years. The Upper House (National Council) has 144 members, of which one-third are elected by the president and two-thirds are elected by regional and municipal assemblies. The term of office of the members of the upper house is six years. Half the national council is replaced every three years. The National Council must pass laws passed by the lower house by a three-quarters majority.

According to a law from 2012, between 20 and 50 percent of the persons on the parties’ electoral lists must be women, depending on how many seats the electoral district has. After the election that year, almost a third of parliamentarians were women.

Citizens over the age of 18 have the right to vote.

Algeria is divided into 48 provinces and 1,540 municipalities. Each province is headed by a governor appointed by the president. The provincial assemblies are elected for five years.

Following extensive protests in 2011, some reforms were adopted which, among other things, made it easier for political parties to be approved by the authorities. As a result, 23 new parties were allowed to register for the 2012 elections, and almost 30 parties entered parliament. The popular wave of protests in 2019 has prompted the regime to promise new constitutional amendments, and a referendum will be held on the proposals.

The National Liberation Front (Front de libération nationale, FLN) is the heir to the liberation movement against the French colonial empire that was formed by Algerians in exile in 1954. After waging guerrilla war against the French army, FLN was converted into a state-bearing party in 1962 and became the only permissible party. democratization in 1989. With the exception of the 1991/92 elections, the party played a completely dominant role.

The Democratic National Assembly (Rassemblement national démocratique, RND) is a sister party to the FLN that has ties to the military leadership and advocates more market-adapted economics. RND has been the second largest party since 2002 and collaborated with FLN in the so-called presidential alliance. Its long-time party leader Ahmed Ouyahia, who has been prime minister on several occasions, resigned in 2019 after popular protests pushed President Bouteflika away. Ouyahia was then also formally subject to corruption suspicions.

When the one-party system was abolished, the Islamic Rescue Front (Front islamique du salut, FIS) was founded and quickly became the most important opposition force. The party’s goal was to fight Western influence and parts of the party advocated an Islamic state. When the FIS was about to win the 1991/92 parliamentary elections, the military interrupted the electoral process, banned the party and imprisoned thousands of members (see Modern History). FIS is still prohibited.

No Islamist party has subsequently succeeded in obtaining strong support. The largest is the moderate Social Movement for Peace (Mouvement de la societé pour la paix, MSP, or Hamas with abbreviation in Arabic). MSP is the Algerian branch of the Muslim Brotherhood. The party was previously part of the presidential alliance with FLN and RND, but withdrew ahead of the 2012 election and instead formed the Green Algerian Alliance (Alliance de l’Algérie verte, AAV) with two other Islamist parties: Islah (or the Movement de la Reforme Nationale, the Movement for national reform) and Ennahda (al-Nahda or Mouvement de la Renaissance Islamique, Islamic Renaissance Movement). Ennahda, which also has roots in the Muslim Brotherhood, has no ties to the party of the same name in Tunisia. In the 2017 election, MSP instead formed an alliance with a breakaway group, Front for Change (Front du Change, FC), while Ennahda merged with the Front for Justice and Development (Front pour la justice et développement, FJD) and the National Construction Movement (al- Binaa or Mouvement de construction national).

Many observers had expected good election results for the Islamists in light of similar parties’ success in other countries. However, they had no major impact, either in 2012 or in 2017.

Among other secular parties are the Trotskyist Workers Party (Parti des travailleurs, PT) whose party leader Louisa Hanoune as the first Algerian woman took part in the 2004 presidential election. 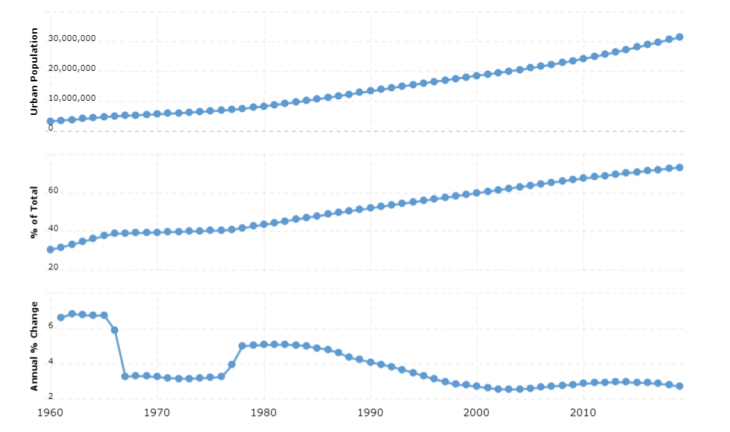 Approves a constitutional amendment that allows a person to hold the office of office for an unlimited number of terms.