In 1984, Colonel Lansana Conté took power in a coup and then ruled the country with harsh methods, even after multi-party democracy was formally introduced in 1992. When Conté died in 2008, the military took over again, but the junta fell just over a year later and a partial civilian transitional government could lead the country against democracy, albeit a fragile one. Since 2010, several elections have been held, often after being postponed several times.

The 2010 constitution was approved by a decree from the transitional government’s leader, Sékouba Konaté (see Modern History). It had been drafted by the National Transition Council (CNT), which served as a legislative body pending parliamentary elections (held in 2013). The Council, which had 150 members, included representatives of trade unions, political parties, the business community and the military.

According to it, the president is head of state and is elected in general elections for five years. She can run for re-election once. The president appoints a prime minister who leads the government and proposes ministers, who must be approved by the president. In order to be elected to the presidential office, a candidate must be 35 years of age.

The constitution also states that there should be an election commission (Ceni), a human rights body and a constitutional court that should be independent of political power. It was approved by voters in a referendum on March 22, 2020, which however boycotted the opposition. According to the new constitution, the term of office of the president, among other things, is to be extended from five years to six years. This has raised fears within the opposition that Alpha Condé will try to seize the opportunity to stand for a third term as president (see Current Policy). The president himself said that it was instead a modernization of the country’s constitution. Other changes include the ban on genital mutilation and child and forced marriage, that no gender should have more than two-thirds of the seats in Parliament, and that it should pave the way for a more equal distribution of the country’s resources.

The country is divided into eight administrative units, of which the capital Conakry constitutes one, and 33 smaller units, prefectures.

There are about 130 parties registered in Guinea short for GV by Abbreviationfinder, but political ideologies play little role. Most of the parties are associated with a people group and ethnic tensions have several times led to violence, not least during the 2010 presidential election (see Modern History). The contradictions have been fueled by the notion that the people group to which the president belongs will benefit politically and economically.

The larger parties include President Alpha Condés Guinean People’s Party (Rassamblement du Peuple de Guinée, RPG), founded in 1980. For a long time, Condé was the prime name of the democratic opposition and he has previously lived long periods in exile where he taught at the Sorbonne University, among others. in Paris. In the late 1990s, he was jailed for 28 months for political reasons. In the 2010 presidential election, he was able to win by gathering support from 16 parties that formed the Rainbow Alliance. However, the collaboration collapsed and in the 2013 parliamentary elections RPG, which is the strongest among the Malinké people, set up on its own. The same thing in the parliamentary elections in spring 2020,

UFDG was shaken for 2015/2016 by a conflict between the party leader and UFDG’s former deputy leader Bah Oury, who criticized Diallo’s way of leading the party. Oury was excluded from the UFDG in early 2016. He was sentenced in 2011 in his absence to life imprisonment for involvement in a murder trial against President Condé. However, he was pardoned by the president and has been able to return home. Oury has since formed a new party, the Union for Democracy and Development (Union pour la Democracy et le Développement, UDD).

The Union of Republican Forces (Union des Forces Republicans, UFR) is led by another former prime minister, Sidya Touré, and is strongest among susu and baga. The Party for Hope and National Development (PESN) is also led by a former head of government, Lansana Kouyaté, and has many supporters among Malinké.

The Liberal Bloc (Bloc Libéral, BL) was formed in 2013 and is led by Faya Millimouno.

Several opposition parties formed in April 2019 National Front for the Defense of the Constitution (Front National pour la Defense de la Constitution, FNDC) in order to prevent President Alpha Condé from running for re-election in the 2020 presidential election. According to the constitution, he cannot participate then he has already sat for two terms, but his party RPG is pushing for that to be possible. In addition to the parties UFDG, UFR and BL, FNDC includes several trade unions and a number of other civil society organizations.

The major opposition parties boycotted the 2020 election, which led to the RPG gaining its own majority in the National Assembly, and a number of small parties winning representation in the House. 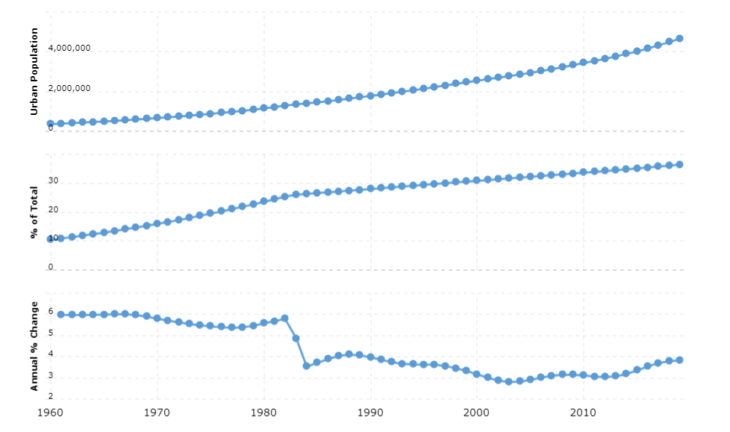