Since 1991, short for SO by Abbreviationfinder, Somalia has not had a functioning central government. A number of attempts have been made to create a new national administration, but the governments formed over the years have been weak and only controlled a smaller part of the country. Islamic groups, especially the militant al-Shabaab, pose a serious threat to the government. In practice, Somaliland in the northwest serves as an independent state. In 1998, three regions of northeastern self-government within Somalia were named under the name Puntland.

In 2012, a new parliament was created that appointed Hassan Sheikh Mohamud as president. In the same year, a new provisional constitution was adopted by a Constituent Assembly whose 825 members were taken from the country’s largest clans (see Modern History). It was also the person who elected the parliament that took office in 2012. The election received a lot of criticism, partly because some members were elected despite being suspected of war crimes. Several people were also accused of corruption in connection with the election.

An important cornerstone of the Temporary Constitution, which will also be approved in a referendum, is that Somalia should be transformed into a federation with 18 states. It should also pave the way for free elections within a multi-party system.

The federal parliament has two chambers, public house and upper house. The lower chamber’s 275 members shall be elected in general elections for a term of four years. Its task is to approve, amend or reject the legislative proposals presented to it.

All members must have at least equivalent upper secondary education and must not be guilty of war crimes. 30 percent of the members must be women.

The president, who is the head of state and commander-in-chief, appoints the prime minister. She is elected by both federal chambers for a term of four years. The executive power is exercised by the Council of Ministers, which is headed by the Prime Minister.

The idea was to divide the land into five states, with its own governments and parliaments. The states would in turn in a total of 18 regions. When the process began in 2013, it caused tensions that in some cases led to regular fighting. The Constitution also states that the borders that Somalia had, according to the previous constitution of 1960, still apply, and that no state / region has the right to break away from the rest of the country.

The temporary constitution guarantees a wide range of civil rights, which prohibits all Somalis from having a right to basic education and female genital mutilation. Territorial disputes shall be settled by peaceful means and a Truth and Reconciliation Commission shall be established.

According to a peace plan, general elections were to be held in Somalia 2016, but the lack of security in the country meant that this was not possible. Various proposals discuss how a new president and a new parliament could be elected. A national leadership council, the National Leadership Forum (NFL), which included the president, government and regional leaders, agreed in the fall of 2016 that political parties should be registered and that all MPs must have joined a political party by October 2018. Those who do not had done so would lose its place in Parliament. The aim was that the National Election Commission in 2020 could organize elections according to the principle “one person, one vote”.

In the fall of 2016, 14,000 delegates, consisting of clan elders and regional leaders, appointed members to both new chambers of the new parliament. In February 2017 Parliament appointed Mohamed Abdullahi “Farmaajo” as new president.

Although Somalia has for many years lacked a central power, there have been a number of informal power centers, “municipalities”. Together with mayors, elders, businessmen, women’s groups and others, they have to some extent continued to function as a kind of government at the local level.

The process of forming political parties in Somalia has begun. In the spring of 2017, an office for registration of parties was opened in Mogadishu. Even before, there have been organizations that have called themselves parties, but these have not played an important role. Instead, it is the ties to one’s own clan that are most significant. The four largest clans, hawiye, darod, dir and rahawein, have dominated both politics and the economy in Somalia ever since independence in 1960.

Mohamed Abdullahi “Farmaajo” who was named the country’s president in 2017 belongs to the darod clan (marehad subclan). He founded the Somali Justice and Peace Party in 2012, often just called Tayo (which means quality).

His representative Hassan Sheikh Mohamud formed the Peace and Development Party (PDP) in 2011 with students from the university and members of al-Islah (who have been compared to the Muslim Brotherhood in Egypt). An outbreak group from al-Islah, Damul Jadiid (New Blood), was considered to have great influence over Hassan Sheikh Mohamud’s government. Like her presidential candidate, Sharif Sheikh Ahmed, she belongs to the Sheikh Mohamud hawiye clan (and the sub-clan abgal).

The biggest threat to the government is the militant Islamist group Hisb’ul Shabaab (Harakat al-Shabaab al-Mujahideen, usually just called al-Shabaab) (Youth), which partly has its roots in a former Islamist al -Ittihad al-Islami movement (see Foreign policy and defense). Al-Shabaab had a prominent role when the Islamic Courts Union (Union of Islamist Courts, UIC) in 2006 took power in Mogadishu and much of southern and central Somalia. UIC’s rule in Mogadishu was overthrown by the then transitional government, supported by Ethiopian troops (see Modern History). Al-Shabaab then became the driving force in the armed resistance against the new rulers and the foreign troops. In 2008, the United States placed al-Shabaab on its list of foreign terrorist organizations. In 2011, al-Shabaab announced that the group had joined forces with the al-Qaeda terror network . It has particularly close ties to al-Qaeda in the Arabian Peninsula (Aqap), which is primarily active in Yemen. In recent years, some militia members have said to have ties to another extremist group, the Islamic State (IS), which has created tensions within al-Shabaab. In Puntland, IS was estimated to have around 200 men in the fall of 2017.

There are also examples of how some local leaders collaborate with al-Shabaab to undermine political opponents, including in Jubaland.

No one really knows how big the group is today, but according to experts in jihadist violence, in 2019 it consisted of between 5,000 and 7,000 people. According to some analysts, there is strong tension between a more militant part that relies on foreign “jihadists” and a nationalist more moderate part. Other evaluators believe that the conflicts within the group are primarily about personal contradictions and not ideological ones.

Ahmed Abdi Godane, al-Shabaab’s leader for many years, was killed in September 2014 in a US air raid. However, al-Shabaab is far from being defeated and has continued to forcefully fight the government. Its terrorist act has claimed thousands of deaths, many of them civilian. The terrorist attacks, along with al-Shabaab’s actions during the 2011 famine disaster, when preventing relief organizations from assisting the victims, threats and harassment, have to some extent undermined their position among ordinary Somalis. At the same time, there have been no difficulties in acquiring new recruits among young Somalis, both domestically and abroad. Several reports have warned that al-Shabaab has succeeded in infiltrating both authorities and the police and the military. At the same time, there are forces within the group that oppose the tactics of violence against the civilian population.

After Godane’s death, al-Shabaab is led by Ahmed Umar Abu Ubaida (who also goes by the names Abu Ubaidah and Ahmed Diriye).

Previously, there was another militant Islamist group, Hezb al-Islam, which was incorporated into al-Shabaab in late 2010. The two groups had worked together, fought each other.

The grassroots movement Ahlu Sunnah Waljama’a (Majority, ASWJ) was formed in 1991 to defend its Sufic focus on Islam. It took weapons in 2008 against al-Shabaab and is militarily supported by Ethiopia.

Since 1991, Somaliland in the north-west has in practice functioned as an independent state (see Somaliland) and in 1998 three regions of northeastern self-government within Somalia were named under the name Puntland.

There the situation has been more stable than in the rest of the country. This is largely due to the fact that each area is dominated by a clan, iSssaq in Somaliland and the darod clan major in Puntland. In both Puntland and Somaliland, political structures have been created where clan elders have played an important role.

Somaliland has a border conflict with Puntland over the Sool, Sanaag and Cayn regions. It has on several occasions led to armed confrontations. In 2012, the leaders of these regions announced a new “state”, Khaatumo, which wants autonomy within Somalia.

Somaliland has a border conflict with Puntland over the Sool, Sanaag and Cayn regions. It has on several occasions led to armed confrontations. In 2012, the leaders of these regions announced a new “state”, Khaatumo, which wants autonomy within Somalia.

Puntland has its own legislative assembly with 66 members. Political parties were banned until 2012. A new constitution paving the way for a multi-party system was approved that year. Since then, several political parties have been formed.

In 2013, the region’s elders appointed a new parliament with 66 members, including one woman. In January 2019, Parliament elected businessman Said Abdullahi Deni as new president for five years.

Somalia’s national judiciary has collapsed. At the local level, various combinations of Somali custom (xeer), traditional Islamic law (sharia) and laws that were established under Siad Barre’s rule 1969-1991 are applied.

According to the provisional constitution, no laws that contravene Sharia may be adopted. In the parts of the country controlled by the government this has led to few changes in practice. In the areas where al-Shabaab is strong, a strict interpretation of Sharia law is applied. However, the application is arbitrary. A person who has a mobile phone with a, according to the Islamist group, unauthorized ringing can manage to seize the phone, while in other cases they run the risk of being executed.

The government often allows a military court to enforce justice even in cases involving civilians. Of the 15 people sentenced to death and executed in 2014, only two were soldiers in the government army.

The conditions in the prisons are poor. Children who are incarcerated are often held in the same prisons as adults. Torture occurs, although it is prohibited in large parts of Somalia.

Somaliland’s constitution provides for an independent judiciary, but in practice the authorities interfere in the work of the courts. Puntland has functioning courts, although there are a number of deficiencies in the justice system. Many disputes are also settled here by traditional clan leaders.

In southern and central Somalia, all parties to the conflict violate human rights. This also applies to government troops and the African peacekeeping force Amisom. Get punished for the abuse.

Sexual violence is widespread, especially vulnerable women and children living in camps for internally displaced persons. According to UN data, at least 1,700 rapes occurred in such camps in 2012. In several notable rape cases, where soldiers from Amisom have been singled out, both the government and the AU have argued that the allegations of abuse were unfounded.

Both government forces and Islamist groups use child soldiers. However, they are the most in al-Shabaab.

Both the current government and the former have been accused of widespread corruption. In a UN report from 2013, it was claimed that 72 percent of the withdrawals made by the central bank had been to private individuals or to representatives of the administration who used them for private use. In addition, one-third of the revenue from port fees in Mogadishu disappeared each month without being reported.

Both the government and militia with ties to it have been accused of seizing aid broadcasts. Soldiers in Amisom are suspected of having sold weapons to al-Shabaab, among other things. 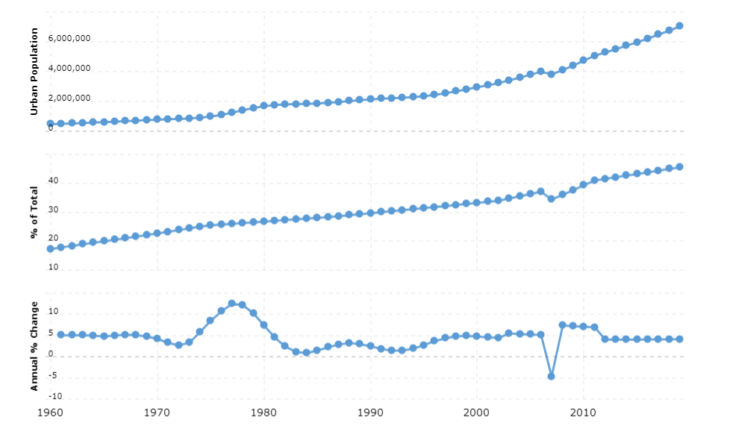