In the Republic of Zambia, short for ZA by Abbreviationfinder, the president has great powers of power. The Social Democratic Movement for Multiparty Democracy (MMD) was the country’s largest political party for 20 years until the fall of 2011, when the opposition Patriotic Front (PF) received the most votes and could form government. The political system has several democratic deficiencies, including widespread corruption.

After 18 years as a one-party state, Zambia gained a new democratic constitution in 1991. It has been revised several times since then, most recently in 2016.

The executive power is held by a president with extensive powers. The president is head of state and government as well as commander-in-chief. The President appoints a Vice President and a government, whose members must be members of Parliament. Presidential elections are held every five years and the president may be re-elected once. As of 2016, a presidential candidate must get more than 50 percent of the vote in order to be elected. Thus, there may be a second round of elections between the two main candidates from the first round.

The Legislative Parliament, the National Assembly, has a chamber of 156 elected members. In addition, eight members are appointed by the president. Parliament also includes the Vice President, the President and the First and Second Deputy Speaker. Elections to the National Assembly are held at the same time as the presidential elections every five years. The voting age is 18 years.

In addition to the National Assembly, there is an Advisory Assembly (House of Chiefs), consisting of 27 traditional leaders from the country’s ten provinces: Central, Copperbelt, Eastern, Luapula, Lusaka, Muchinga, North-Western, Northern, Southern and Western.

The provinces, which are divided into 103 districts, are governed by each governor appointed by the president.

The judicial system is made up of British designs with local courts and a supreme court of about 30 judges. All criminal cases in the lowest instance can be changed by the High Court, whose decision can in turn be appealed to the Supreme Court, the Supreme Court.

Movement for Multi-Party Democracy (Movement for Multi-Party Democracy, MMD) was the first party that was formed when the one-party state came to an end in 1990. The founders wanted to get rid of the then President Kenneth Kaunda’s party, the socialist United National Independence Party (United National Independence Party, UNIP). The MMD, which is usually referred to as Social Democratic, won the first democratic elections held in 1991. Many members then resigned and formed new parties.

Despite all the fragmentation, the MMD remained the country’s largest party until the parliamentary and presidential elections in September 2011, which was won by the largest opposition party Patriotic Front (Patriotic Front, PF). PF received a few more seats than MMD, which came second. PF had focused on criticizing the incumbent government for the high food and fuel prices as well as the growing Chinese influence in Zambia. The party won support from the large group of first-time voters. In the 2016 election, MMD lost almost all support, while PF remained the largest party.

The second largest party in the National Assembly has been the Liberal United Party for National Development ( UPND) since 2016. It was formed in 1998 by company manager Anderson Mazoka along with defunct MMD politicians.

Among the small parties are the Forum for Democracy and Development ( FDD), which was formed before the 2001 elections, including that of former MMD members. The party has since seen its voter support decrease and has only been given a mandate in the last elections.

Kaunda’s old party Unip has in recent years led a thinning life under the leadership of Kaunda’s son Tilyendi Kaunda. The party no longer has any representation in Parliament. 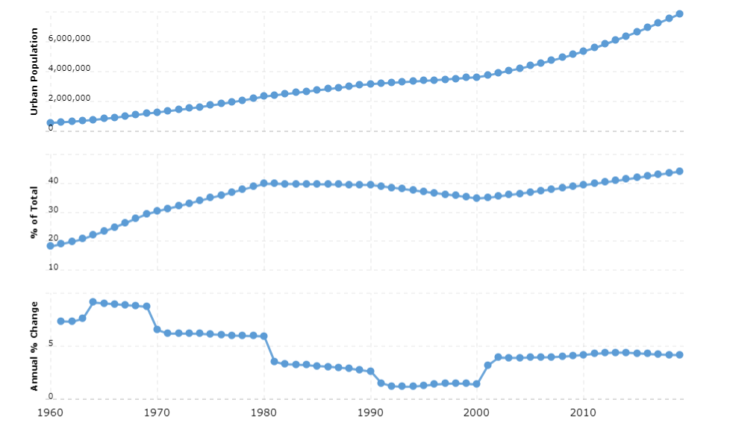 The Daily Nation is prosecuted following an article about Sata

The Daily Nation magazine publishes an article in which President Sata is accused of corruption. According to the article, Sata should have helped friends avoid having to pay a large debt to a state bank. The newspaper is later charged with defamation.

The separatist movement Barotseland’s National Council issues a declaration demanding independence for Barotseland. The declaration is condemned by the national authorities and the Council leader goes underground.